Who we are and What we do

Giacomo Mezzadri and Joana Oliveira are Mezzo Atelier, a young Italian/Portuguese practice working both as a studio and as a practical laboratory. The two architects, with different professional backgrounds, run a multidisciplinary atelier developing architectural projects, installations, interiors and self produced objects and furniture. Inspired by Bauhaus’ concept of global art, their goal is to design spaces and objects as a hole, achieving a complete customization for each project and clients.

The control of each step of the design process is fundamental, working from the concept until the production and realization of the pieces on their workshop, whenever the project’s scale makes it possible. This approach to the design practice makes it possible to depend less on third parties and develop hand-made and unique pieces.

Mezzo Atelier has been invited to tutor self-construction workshops in Milan, Lisbon and Azores. After having worked in the Netherlands and Brazil they have set base in Italy from where they develop projects for other countries like Portugal and the Netherlands.

Giacomo is multidisciplinary designer whose infinite curiosity makes him cross the borders between architecture, art and design. Having finished his architecture studies at Politecnico di Milano, he then decided to explore other scales along with the Dutch art collective Atelier van Lieshout, based in Rotterdam. There he worked for 3 years, developing objects, sculptures, art installations or exhibitions, from conception phase until the actual execution of each piece. In 2011 he works in São Paulo and completes a post-graduation course in Escola da Cidade.

Joana drew her architectural path along the globe for some years now. Living until she was 18 years old in São Miguel Island in the Azores, she then moved to Lisbon to study Architecture. Her last year of studies was at the Bauhaus University of Weimar in Germany and soon after she started a period of four years of work in Rotterdam, where she collaborated with STAR – Strategies + Architecture, de ZwarteHond and HappelCornelisse. Later, in 2011 she searched for a new challenge and moved to São Paulo in Brazil, where she worked at Studio Arthur Casas until the end of 2013. There she also enrolled a post-graduation course in Escola da Cidade about Architecture and Urban Planning in the American continent. In 2014, Joana collaborated as copy writer for the portuguese representation at the Architecture Venice Biennale, the news paper, Homeland – News from Portugal, curated by Architect Pedro Campos Costa.

June 2016 – project for an office in Ponta Delgada, Sao Miguel;

May 2016 – conclusion of custom made furniture for BASE MILANO (coworking and hostel space);

May/June 2015 – participation of Design in Corso ( design festival in Brescia) with an exhibition, workshop and talks;

May 2015 – development of furniture series for Save the Children Pavilion at Milan Expo 2015, in collaboration with architecture studio Argot ou la Maison Mobile;

May 2015 – development of a special edition of “Mezzo Mercato” for Milan Expo 2015 for a street food square;

April 2015 – collaboration with LaButtiga and Kartell for the design of a party gadget for their presentation during Salone del Mobile;

March 2015 – coordination of a participatory workshop in Milan, with immigrant children, for the construction of façade’s panels for Save the Children Pavilion at Milan Expo 2015, in collaboration with architecture studio Argot ou la Maison Mobile;

January 2015 – Mezzo Mercato edition for Dutch Supermarket Albert Heijn in the design capital of Eindhoven;October 2014 – participation at the 2nd Architecture Seminar of the Azores with a conference on the theme “Nomad Architecture”;

August 2014 – Workshop and project Redesign Tradition I Play Architecture with Argot ou la Maison Mobile for urban design festival Walk&Talk in Azores, Portugal; Organization and curating of a conference cycle during the festival;

May 2014 – participation of the festival Mantova Creativa;

May 2014 – talk and practical workshop at Mutty;

April 2014 – the installation “Mezzo Mercato“ is selected to be built and exhibited at Piazza XXVI Aprile in Milan for the Public Design Festival during Salone del Mobile;

February 2015 – the architecture project “Pink House” was selected for the Young Creative Award of the Azores, Lab Jovem; 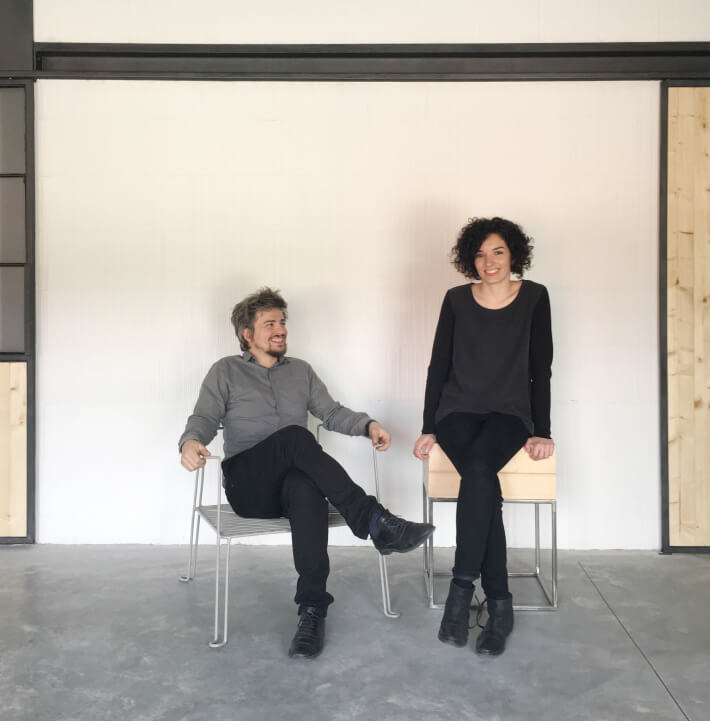