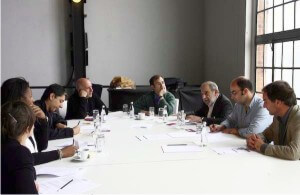 Some of the proposals in one of the rooms of Museu da Electricidade and beginning of the jury’s evaluation meeting Randomly, to each received proposal the Lisbon Architecture Triennale’s technical team attributed an entry number. By opening the outer wrappings of each package the team disclosed the envelopes containing the project (panels), the documents and the CD-R, to which was given the same entry numbers as the outer wrapping. All the projects accepted to the competition were presented to the jury.

At nine o’clock of the eighth day of May of the year two thousand and ten, at the Museu da Electricidade, the jury gathered in order to assess the works, being therefore present:

Ar. Barry Bergdoll (Appointed by Triennale’s Patrons for the Exhibition)

In the scope of the competition, the Lisbon Architecture Triennale received 599 proposals (five hundred and ninety nine), 11 (eleven) of which were received after the previously established deadline for the reception. The Jury considered that the 11 (eleven) proposals received after the deadline given in the regulations would not be accepted in the competition. Therefore, 588 proposals were submitted to the jury’s appreciation.

The President of the Jury, architect Álvaro Siza Vieira, after formally deliberating with the rest of the members the non acceptance of the tardy proposals, considered that it was time for each Jury member to express his or her major concerns respecting procedure and proposal selection.

Commenting on the factors, expressed in the regulations, underlying the proposal selection, Siza Vieira expressed a special interest in the questions concerning the transitoriness aspects: on one hand, to maintain these populations’ heritage, their traditions and practices, on the other hand to ensure the necessary structures for a society undergoing a fast transformation process – the project, therefore, should serve the current communities, but also, present a strong prospective nature.

Ângela Mingas, on the other hand, considers self-construction to be one of the most valuable characteristics of this kind of proposal for this given location; behavioural issues, social patterning, the fact that, in this particular context, what she sees as a “house” is something more than just an isolated building (concerning, of course, the gregarious character of the different houses), as well as the central relevance assumed by the patio in all of them in this population’s socializing process, are for her the most important aspects.

Barry Berdoll, on his part, shows a special interest, not in merely formal issues, the proposal’s design, but in a system that can ensure good living quality. He privileges the proposal’s ability to stand for thermo and environmental qualities, and that can assure for the growth of the building structure without compromising its initial architectural characteristics, therefore by presenting unquestionable flexibility aspects.

Fernando Mello Franco considers the strong rural background of these populations; and yet, “in 20-30 years from now, this whole population will be urban”; to ensure the current rural practices but also to consider for these populations a future of urban life can only be achieved by designing a house that ensures that the current population has this direction as an inevitability. Furthermore, he also considers that the strategy of a systematic reduction in the proliferation of houses is the assurance for an opening up to change.

João Luís Carrilho da Graça expresses the same concerns of his jury peers, and stresses the need for the proposal to adapt to the given circumstances, the fast changing of Angola’s society, maintaining high standards for the proposal’s architectonic quality, as well as the capacity for the chosen model to develop later into a sustainable urban structure.

The several proposals were then individually appreciated by the members of the Jury, taking into consideration their individual quality, their adequacy to the goals of the Competiton, the project’s ability to “weave the urban fabric”, as well as their financial feasibility. After this individual round by the members of the Jury, 81 (eighty one) proposals were chosen as preferential by all, with the following entry numbers:

This sum of these received proposals were considered as those that showed most potential, less constraints, that showed strong prospective characteristics respecting the population’s specificities, their needs and wishes, adequacy of building materials, project adaptability. These projects also bore in mind that the replication of the model can create an adequate system capable of interpenetration with what is the “core” of Luanda city, progressively neutering the actual limitations and deprivations of the existing musseques.

From the first selection to this second group of 40 (forty) proposals, considered as the most adequate; in the Jury’s judgement 41 (forty one) of them were indentified as containing small fragilties concerning some aspects of evaluation factors, previously established in the regulations.

In this selection moment, the proposals that were not selected, in the judgement of the Jury, revealed small fragilities concerningme of the evaluation factors listed in the regulation.

By opening the envelopes of the documents of the aforementioned projects the Jury disclosed the list of coordinating architects responsible for the chosen works, as well as their geographical origin. The authors of the 30 finalist projects will therefore be contacted by the Lisbon Architecture Triennale in order to develop their proposal, according to the established calendar, into a presentation scale model, to be exhibited at the Museu da Electricidade.

The President of the Competition Jury, Álvaro Siza Vieira

Barry Bergdoll’s assessment of the proposals

Ângela Mingas’ appreciation of the projects 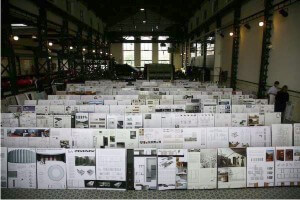 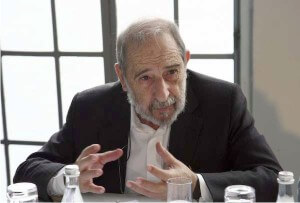 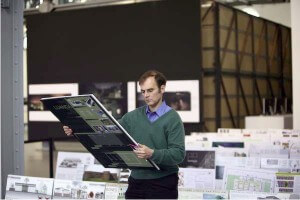 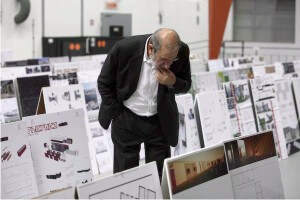 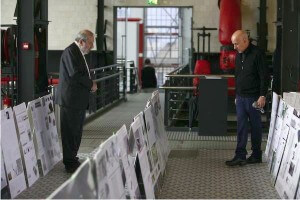 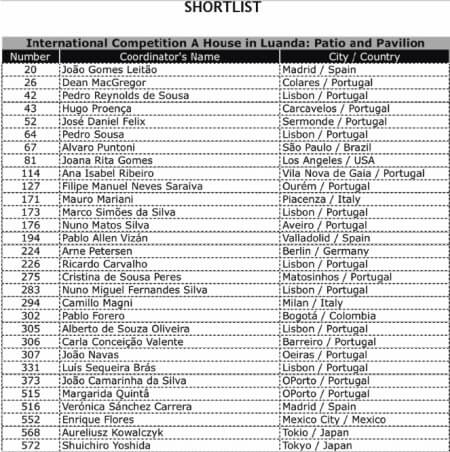