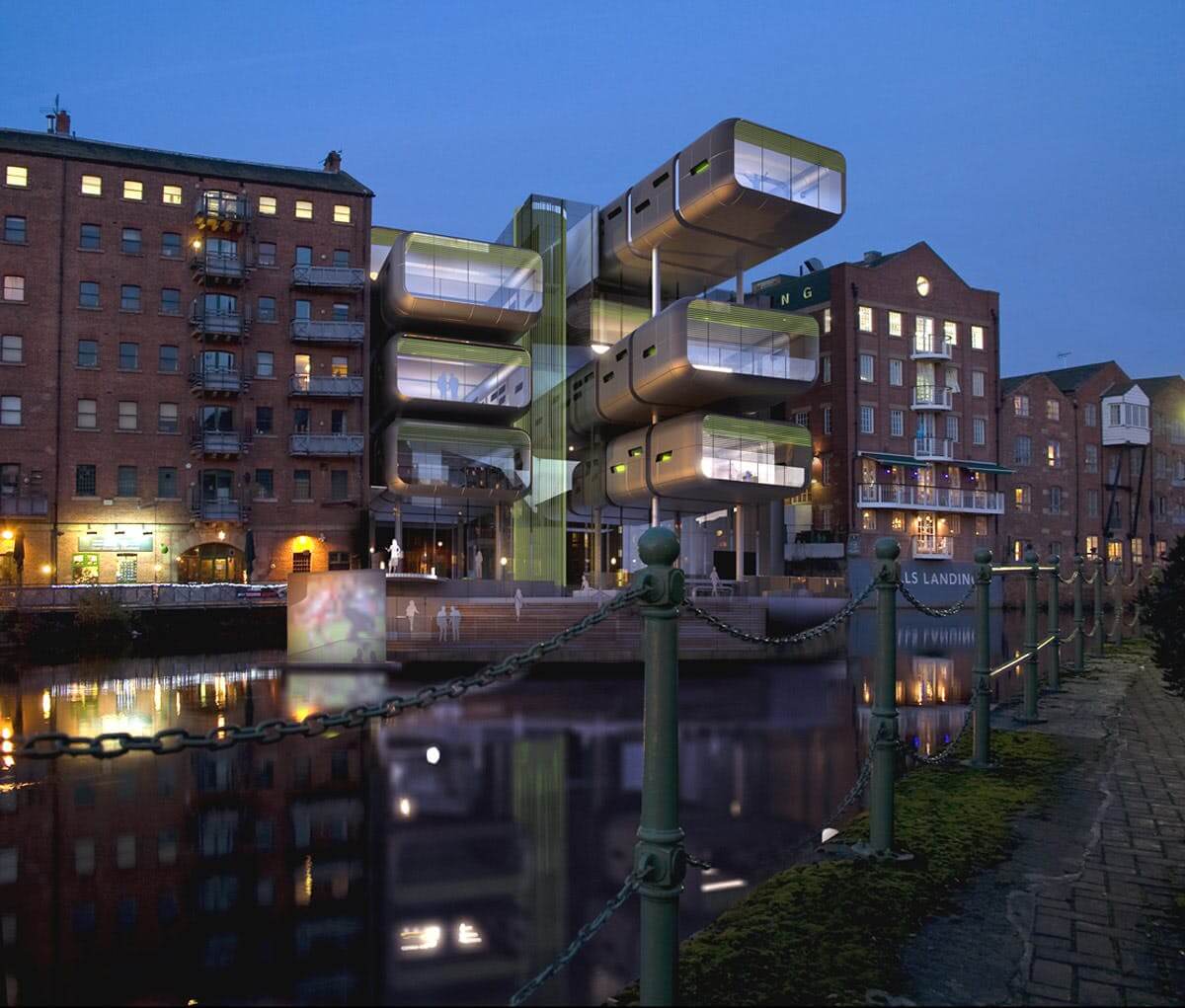 British studio P+HS Architects were recently short-listed for the international “36 The Calls” Design Competition run by the Architects Journal with developer Citu.

Entrants were asked to draw up proposals for an ‘iconic’ commercial building in Leeds, England on a tight parking lot plot on the north bank of the River Aire. As one of the last remaining waterfront sites in the heart of Leeds, it is vital that the successful proposal ticks all the boxes. Citu want to create an iconic building, with distinctive internal and external architecture that complements the existing urban environment and the history of the site; all whilst achieving true sustainability.

The competition is now at shortlist stage and the six finalists have now been invited to present their ideas to the judging panel. Among the judges were Paul Finch, Leeds’ civic architect John Thorp, interior designer Paul Logan, investor/landowner Charles Nickerson and Jonathan Morgan of Morgans City Living. The competition attracted around 95 anonymous submissions, including 20 from overseas.

Here’s a project description we received from P+HS:

Our idea was to keep the scheme as legible as possible with a building design that could be described conceptually as four simple elements:

The yellow skin has a dual role, acting as the superficial ‘iconic’ wrapping and contextualising the building with its form; it has been manipulated to reference the surrounding industrial roof-scape, and to dip down and connect the site with the water. The River Aire has played a defining role in the history of Leeds, and particularly The Calls. The connection is a stepped link that enables barges to moor up, creating a transport link, a summer garden or the start of a future walkway along the river.

The glass box creates a flexible space that the developer can inhabit as required. It encloses the floor plates without detracting from the strong form of the skin. The building could simply be office space, but there is potential to create a ground floor restaurant with a stunning terrace over the water and above there could be unique, luxurious apartments with balconies.

The core is a key element of the scheme: whilst the core physically links the building together, the services housed within it link the building with the surrounding site. The building draws/rejects heat from the river through a series of heat pumps to control the internal temperature. Pipes submerged in the water like roots rise up though the core, pass through heat-exchangers, and spread out under the floor screed at each level, forming a direct relationship between the building, its occupants and the water. 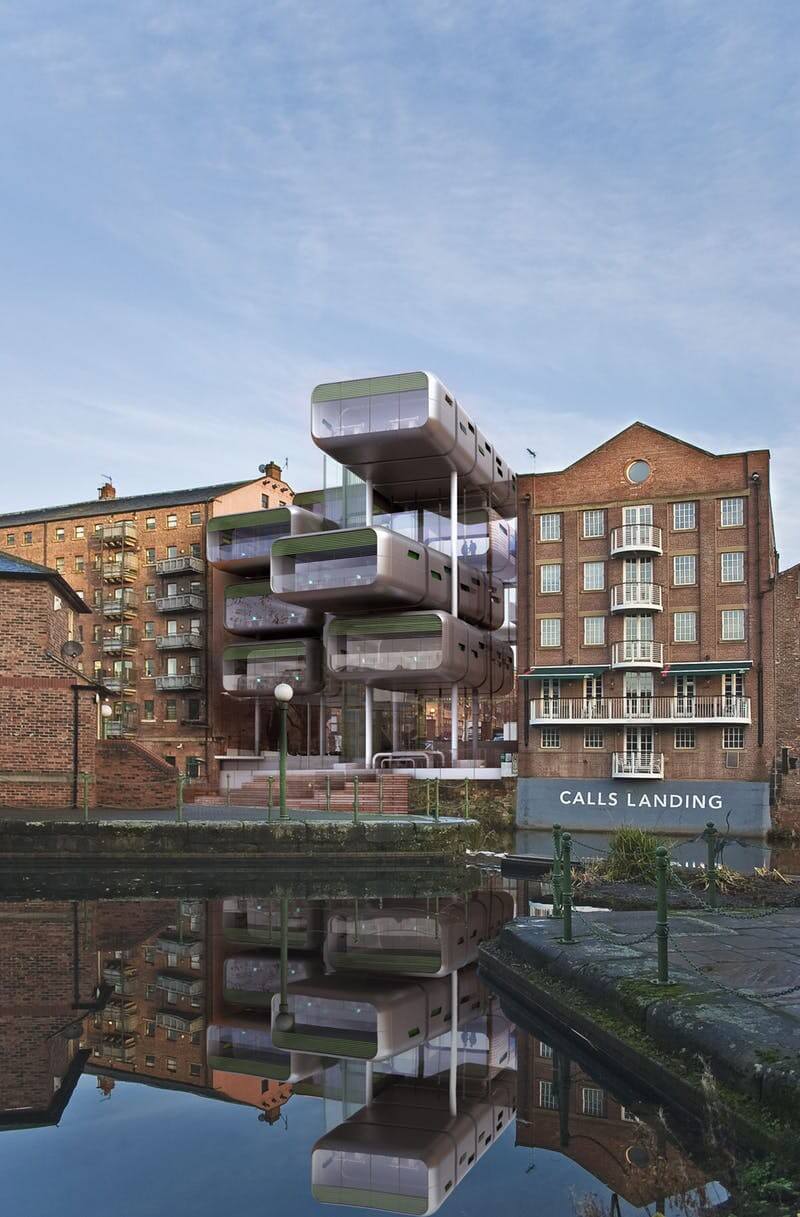 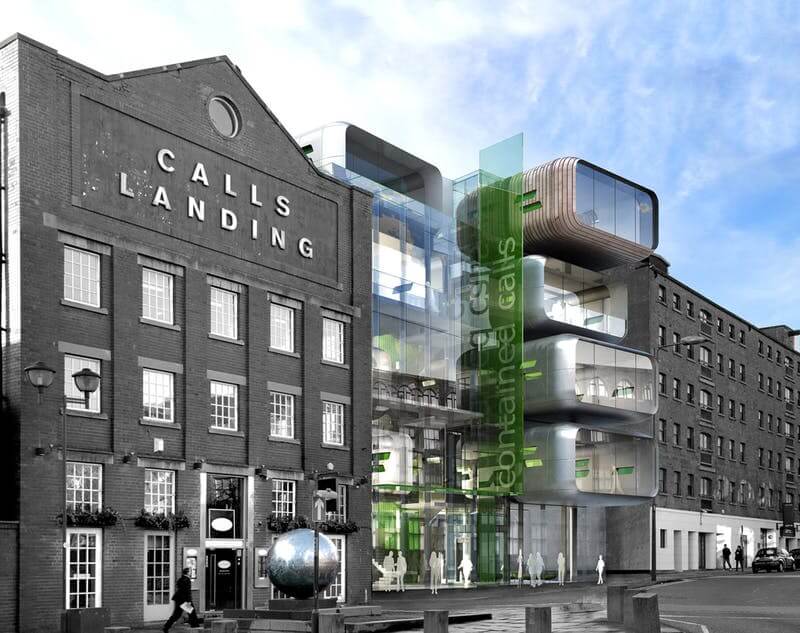 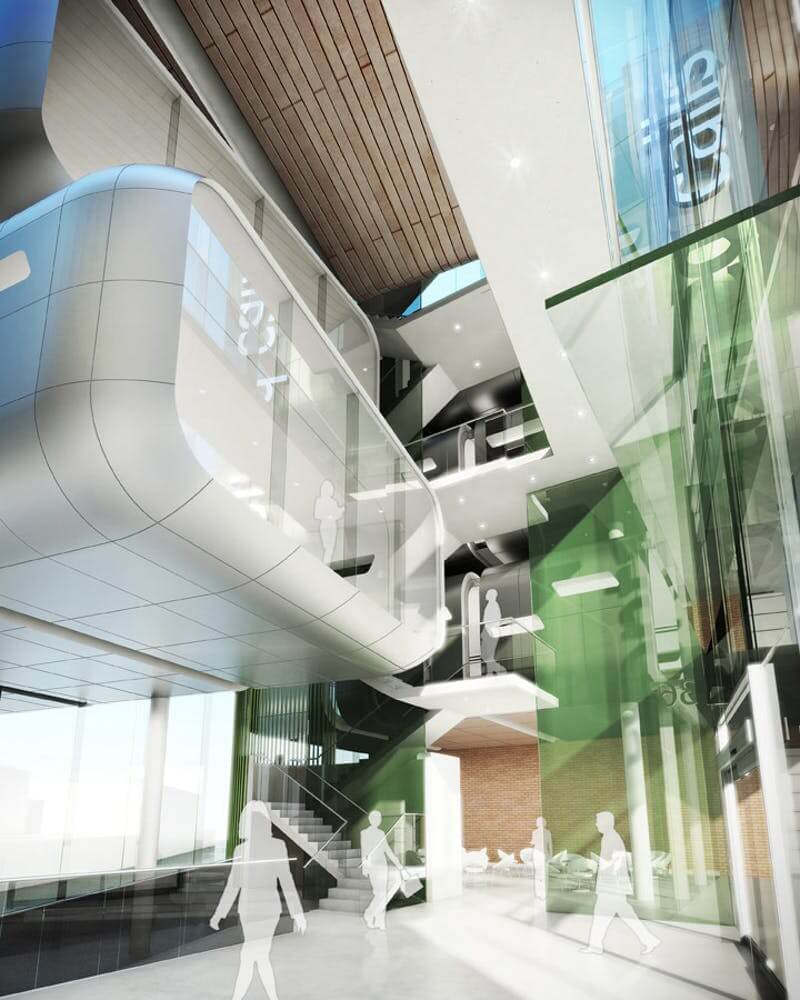 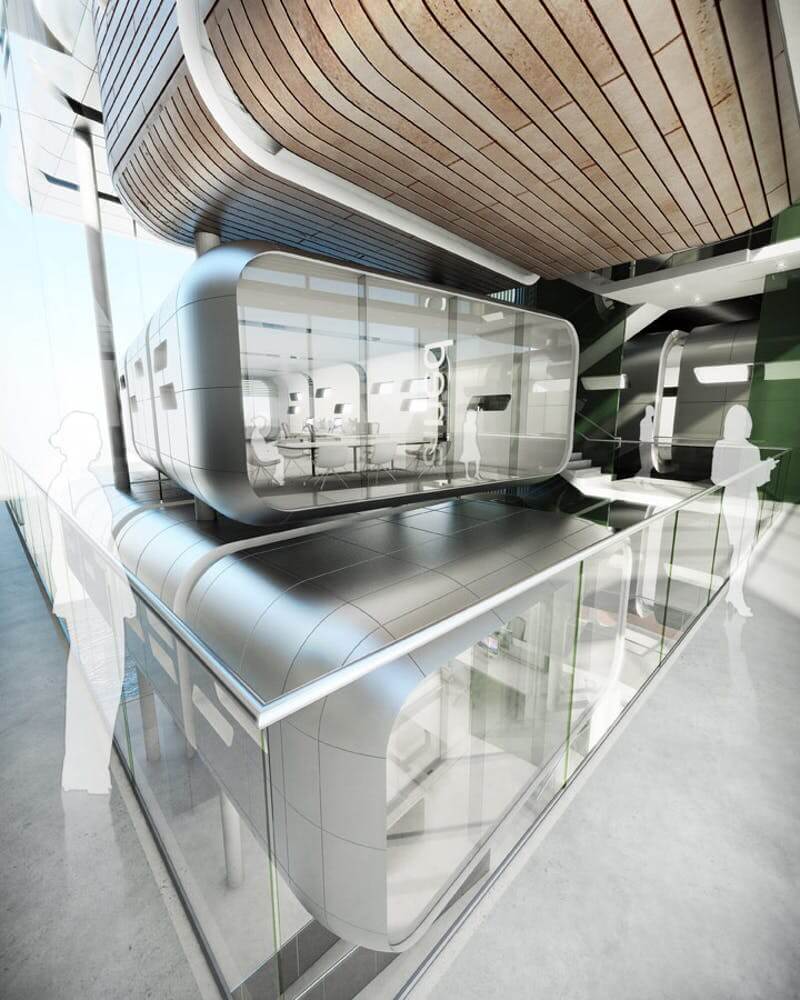 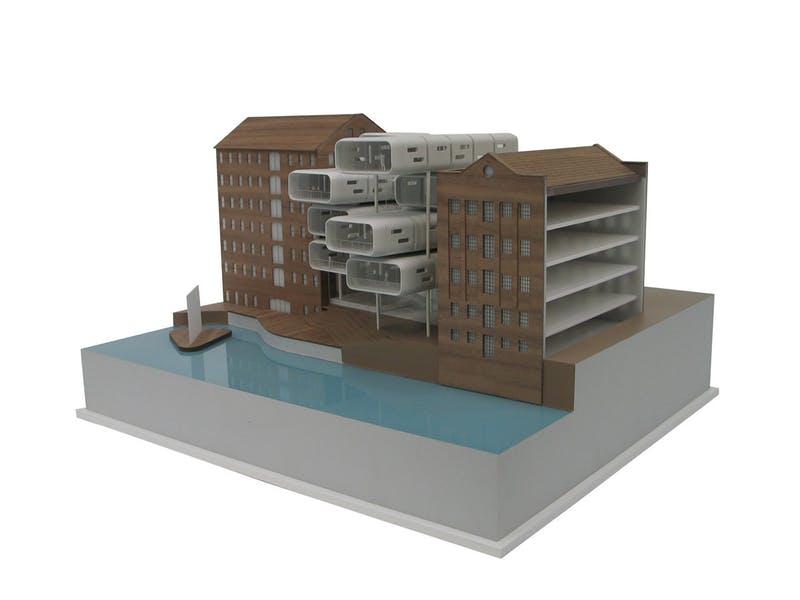 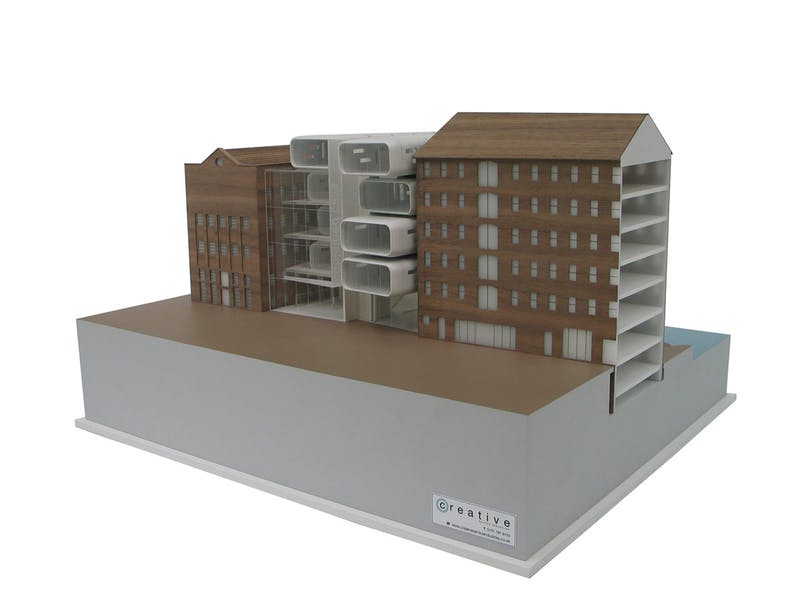 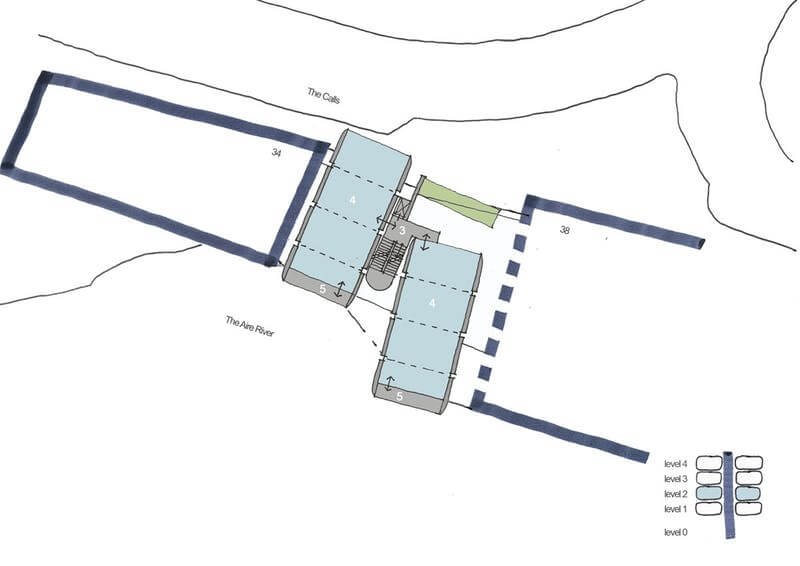 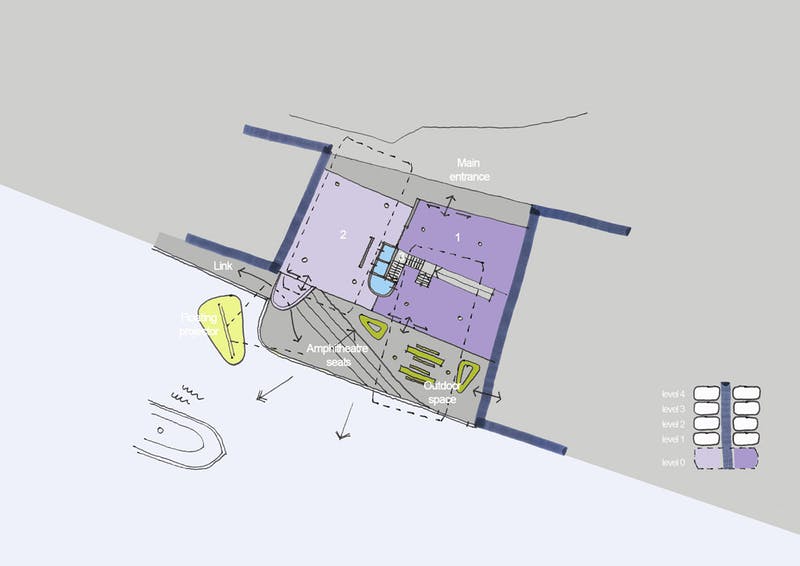